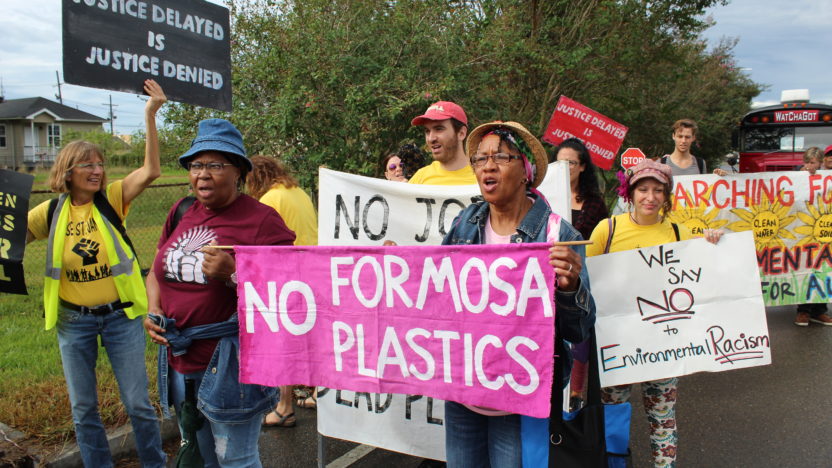 The U.S. Army Corps of Engineers announced plans today to suspend its permit for Formosa Plastics’ proposed plant in St. James Parish, Louisiana. The move comes just before a Nov. 5 filing deadline for the Corps to defend its issuance of permits in a federal lawsuit filed by project opponents. The agency has asked the federal court to stay proceedings in the case.

The decision will block construction of one of the world’s biggest petrochemical plants. The plant would pollute a predominantly Black community, disturb unmarked burial sites of enslaved people, degrade wetlands and add to the ocean plastic pollution crisis.

“I’m overjoyed by this news. This hopefully marks the beginning of our victory over Formosa Plastics,” said Sharon Lavigne with RISE St. James, a plaintiff in the case. “We’ve always said this project would harm our community. Now we need Formosa Plastics to leave St. James.”

The Center for Biological Diversity filed the lawsuit in January, along with RISE St. James, Louisiana Bucket Brigade and Healthy Gulf. It sought to invalidate Clean Water Act permits issued by the Army Corps last year. A motion for summary judgment that the plaintiffs filed last month and a pair of amicus briefs say the massive petrochemical complex would deepen environmental racism and harm a Cancer Alley community already sickened by exposure to industrial pollution.

“There’s no way to defend the damage Formosa Plastics would do to St. James Parish and our oceans. We hope this is the beginning of the end for this terrible project,” said Julie Teel Simmonds, a senior attorney at the Center. “It’s not in the public interest to pollute a Black community and destroy its cultural resources just to crank out more throwaway plastic. We still need to see if the feds will meaningfully revisit their permit, because simply papering over their deficiencies will not do.”

The Army Corps filed a motion to delay the lawsuit pending its suspension and review of the project’s permit. The lawsuit says officials violated federal laws in approving the destruction of wetlands, which help protect the region from hurricanes that are intensifying with climate change. The Corps also ignored the water, air, and health impacts of the complex and failed to protect burial sites of enslaved people discovered on the property.

“Today’s announcement is a victory. We can see Goliath is starting to fall. If the agency had listened to the people of St. James Parish, the Corps would never have issued this permit to Formosa Plastics in the first place,” said Anne Rolfes with the Louisiana Bucket Brigade. “It doesn’t take an engineer to understand that the threats posed by Formosa are unacceptable: destruction of the Black community, desecration of graves, destruction of wetlands, doubling of toxic air pollution, gargantuan release of greenhouse gases and increased cancer risk. This project was a terrible idea from the start and should never have been permitted.”

“The Army Corps’ decision to suspend Formosa Plastics’ wetlands permit is a good and obvious choice. Louisiana has seen seven named storms in the past five months, and Formosa has not planned its facility for hurricanes. There should be no more wetland permits for a company with such an awful pollution record as Formosa Plastics,” said Scott Eustis, community services director with Healthy Gulf. “Our volunteers are still picking up hundreds of thousands of pellets from a single plastic spill three months ago — we can’t afford any new plastics plants until federal laws require cleanup of the trash already there.”

The project also faces another lawsuit brought by Earthjustice in state court challenging the state’s issuance of air permits to Formosa Plastics. Opponents uncovered records of unmarked graves of enslaved people on the site and have urged Formosa Plastics to protect them. Parish residents are now calling on parish council members to reconsider their approval of the project.

Formosa Plastics’ massive proposed petrochemical complex would include 10 chemical manufacturing plants and numerous support facilities, spanning 2,500 acres, just one mile from an elementary school. By turning fracked gas into the building blocks for a massive amount of single-use packaging and other wasteful plastic products, the project would worsen climate change and the ocean plastic pollution crisis.

Last year Formosa Plastics agreed to pay a record $50 million in cleanup and restoration costs to settle a civil lawsuit after its Point Comfort plant discharged billions of plastic pellets into Texas waterways over many years. That settlement included a commitment to zero future plastic discharges from the Texas plant, a standard that has not been applied to its plant in Louisiana.

The Center for Biological Diversity is a national, nonprofit conservation organization with more than 1.7 million members and online activists dedicated to the protection of endangered species and wild places.

RISE St. James is a faith-based organization working to protect the land, air, water and health of the people of St. James Parish from the petrochemical industry.

Healthy Gulf’s purpose is to collaborate with and serve communities who love the Gulf of Mexico by providing the research, communications, and coalition-building tools needed to reverse the long pattern of over exploitation of the Gulf’s natural resources.