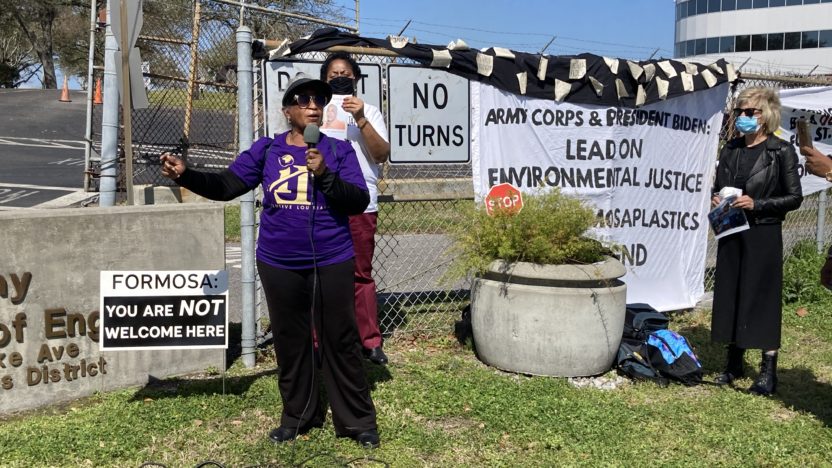 Over 40,000 people from throughout the United States emailed objections to the Army Corps of Engineers regarding the permit for Formosa Plastics, a project that would destroy the African American community in St. James Parish, Louisiana. The groups are calling on President Biden to live up to his commitments regarding environmental justice and climate by halting the project, which would be one of the largest sources of greenhouse gases in the country.

“It is time for the Army Corps to listen to the people in Cancer Alley, not to industry,” said Sharon Lavigne, president of RISE St. James, a group that has led the opposition. “If they don’t stop the pollution, we won’t have anyone here. The chemicals from these plants will wipe us out. The Army Corps has the chance to make the right decision and protect us.”

The Corps suspended the permit in November of 2020, just days before it was due to defend its permit in federal court. The Center for Biological Diversity filed the suit on behalf of Louisiana organizations in January of 2020, challenging the Corps’ failure to disclose the environmental damage and public health risks of the plastic facility under the National Environmental Policy Act. The suit called for the revocation of the Clean Water Act and Rivers and Harbors Act permits. In suspending the permit in November, the Corps cited Formosa Plastics’ failure to consider other locations.

Opponents have underscored the unequal impact on the Black community from the beginning. “The compounding pollution that would be caused by Formosa Plastics in Census Tract 404 is confirmation that St. James Parish is a sacrifice zone,” said Gail Leboeuf of Inclusive Louisiana.

The 40,000 comments were sent to the Army Corps starting on the 29th of January, when RISE St. James, the Center for Biological Diversity, the Louisiana Bucket Brigade, Healthy Gulf and Friends of the Earth launched a do it yourself comment period. “The Army Corps’ permitting process is hidden from view, yet the impact of the decision is life or death for us here in Louisiana,” said Anne Rolfes, Director of the Louisiana Bucket Brigade. “This facility would be one of the largest plastics plants in the world, so we organized a way for the people to have a say. We have resoundingly spoken, and we want the Biden Administration to listen and to act.”

RISE St. James and other groups have organized political and legal actions opposing the project over the last year. Those actions include protecting the slave burial grounds on the project site.

“The Corps must consider and protect the historical nature of this site,” said Scott Eustis, Community Science Director with Healthy Gulf. “The ancestors buried here likely fought for their freedom, likely won our freedom for the nation, and must be consecrated. Their stories have not been told, and their stories are our national heritage. The Corps must consider that Formosa’s preference to bulldoze their graves to build a plastics mega facility in Louisiana’s swamps is not in the interest of the climate, not in the interest of New Orleans’ drinking water, not in St James’ economic interest, not in the state’s interest, and not in any way in the nation’s interest.”

“The planned Formosa plants are destructive of human life and the planet. Since they are a major threat to the lives and health of children and families in the adjacent African American communities they represent a perfect example of systemic racism and must be denounced as such!” – Peter Digre, Climate Reality NOLA

“Pollution of our people, our air, land and water eventually affect the world. The health and safety of the people along the Mississippi River and the coastal parishes does affect other areas. In fact, that’s how global warming is melting icebergs that will drown the damaged and polluted coastline too. The notion that sacrificing one area and a group of poor, working, Black and “other” people will actually be a surgical cut that doesn’t harm anywhere or anyone else is inaccurate and immoral and in many cases illegal. Stop Formosa!”- Debra Campbell, Board Member, A Community Voice

“The UN statement on Formosa should make any further progression of construction untenable and should serve to mobilize the advocacy of leaders from all segments of humanity to courageously oppose this immoral display of environmental racism and genocide.” – Rev. Gregory T. Manning Greater New Orleans Interfaith Climate Coalition