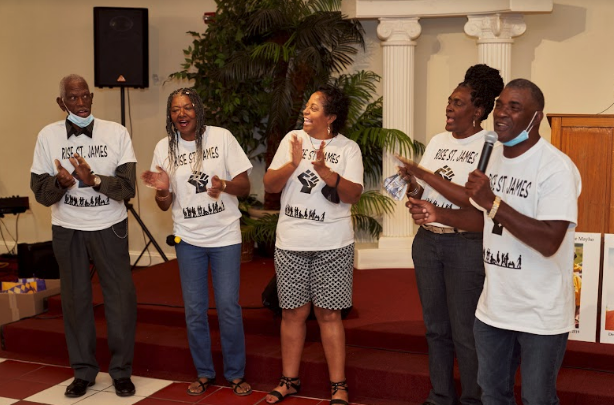 I am a lifelong resident of the Fifth District of St. James Parish, a rural community in the heart of Cancer Alley. Over the last six decades, I have watched my community and other districts become more industrialized, more polluted, and more burdened by cancer, asthma, and other health problems. I have watched parish presidents, the Louisiana Department of Environmental Quality, and other leaders continually deny the environmental injustice that is staring them in the face.

I know you have been watching too, Mr. President, our struggle in St. James. The people of our community heard it when you said “Environmental justice would be at the center of all we do addressing the disproportionate health and environmental and economic impacts on communities of color – especially…the hard-hit areas like Cancer Alley in Louisiana.” We heard it and we appreciate your words. But we also need action. We need the permit for the Formosa Plastics petrochemical complex to be revoked. It is in your power to do so.

I am aware that there is a lot of misinformation going around about the Formosa Plastics project and the health situation in our community, and I want to address some of that misinformation in this letter. I also want to invite you to come to Cancer Alley. Come see for yourself and experience what the people in St. James experience every day. The people of St. James would be honored by your presence.

We have known about this toxic pollution problem for decades, and the evidence of it keeps growing. A new report by the Tulane University Environmental Law Clinic found that higher rates of toxic air pollution are linked to higher cancer rates among Louisiana’s poor communities, using data from the Louisiana Tumor Registry. According to the Tulane Clinic, the Louisiana Tumor Registry’s annual reports don’t show the pollution-cancer link because the Registry doesn’t measure pollution and doesn’t look at poor communities specifically. We have a growing pile of evidence to support what residents have been saying for decades – Black and poor communities in Louisiana are overburdened with cancer and many other health problems from polluting industries. Politicians are right that the term “Cancer Alley” doesn’t capture the situation in my community – it should be called “Death Alley.”

Politicians are trying to blame the victims of polluting industries, claiming that smoking and obesity are responsible for the burden of cancer and premature death in our communities. There is no evidence to support this claim. In fact, the Tulane Environmental Law Clinic Report found that Cancer Alley parishes have had some of the lowest smoking rates in Louisiana and that obesity is a problem throughout the state. The 2021 County Health Rankings Report from the University of Wisconsin Population Health Institute (funded by the Robert Wood Johnson Foundation) shows that St. James Parish ranks better than average for lifestyle factors that affect health, but worse than average for health outcomes. The same is true for St. John the Baptist and Iberville parishes, both in Cancer Alley.

We know firsthand that the high-paying jobs promised by polluting industries don’t go to people who live near these plants. A couple years ago I saw a job ad from a Chinese company for a new chemical plant in my community. One of the job requirements was fluency in Mandarin. I don’t know anyone in St. James Parish who is fluent in Mandarin. In my community (St. James Census Tract 405), nearly a third of people live below the poverty line. Our household income is 50% lower than the Louisiana median, based on data from the U.S. Census Bureau. But we’ve had large industrial plants here for decades, with several more built in the last few years. If these plants bring economic opportunity, why are my neighbors still living in poverty?

The politicians who claim to speak on our behalf don’t represent our views. Over and over, we speak out against proposed industrial plants in our community, but local politicians approve the plants anyway. That is why we need leaders like you who will listen to the people.

Your words matter. Please continue to speak up for Cancer Alley residents whose neighborhoods are overburdened with toxic pollution. And please put those words into action by visiting St. James and revoking federal permits for the Formosa Plastics petrochemical complex. Stopping Formosa Plastics would prevent toxic emissions from more than doubling in our community, and send an important signal that your administration will prioritize environmental justice. No one wants our home to be called Cancer Alley. But let’s restore our name by cleaning up this place and finding alternatives to dirty industry, not by sweeping environmental injustice under the rug, as our local politicians would have us do.