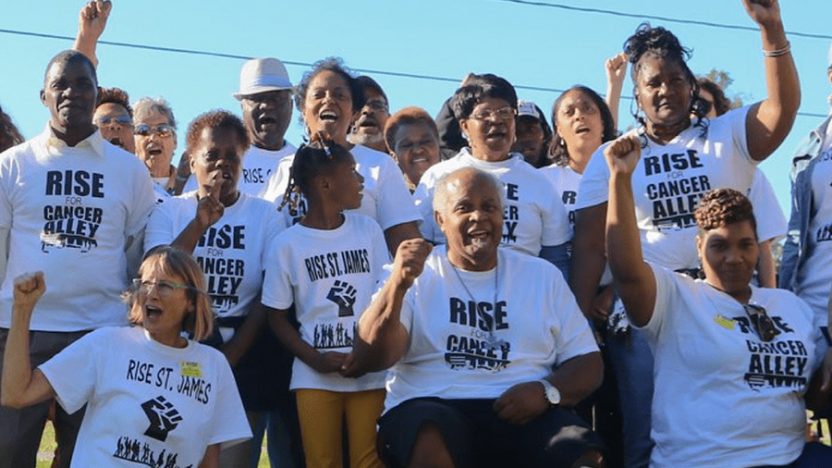 “We have fought hard for our constitutional rights and we take them seriously here in Louisiana,” said Sharon Lavigne, a member of the newly formed Alliance to Defend Democracy. “We will not stand by as law enforcement and a toxic chemical company from Taiwan attempt to scare, silence, and intimidate us. We will not be silent.”

Lavigne was referring to today’s arrest of local advocates who oppose the development of a toxic plastics plant in St. James Parish by Taiwan-based Formosa Plastics. The $9.4B plant would remove slave burial graves and drive up cancer rates in an area known as Cancer Alley.

More than six months after returning a package of plastic pellets called “nurdles” to industry representatives, advocates were charged with a felony simply for returning a sealed container of the very plastic pellets that the company illegally dumped into the Lavaca Bay in Texas.

The sealed package was labeled with a written disclaimer explaining exactly what they were and advocating that Formosa’s air permit be denied. The Taiwan-based company incurred a $50 million fine in October 2019 for their illegal action of dumping these pellets, and now residents fear they may be gearing up to bring similar practices to Louisiana.

Residents say advocates were targeted with arrest only after raising civil rights concerns about Formosa’s controversial plan to remove a slave burial ground and prevent the local community from visiting and praying on the site.

The arrest comes more than six months after the protest, but just days after unflattering news coverage started to surface about the company’s efforts to prevent African-American residents from visiting the sacred burial ground on Juneteenth.

Formosa Plastics has retained corporate lobbyist and hired-gun Jim Harris to run a cynical public affairs campaign and to help the mega-polluter win political support for its toxic plant. Harris has a long history of working against historic African-American communities on behalf of the chemical industry, and has recently defended the company’s plans to unearth and remove the sacred burial ground on the proposed site of Formosa Plastics.

Residents say Harris has been tapped to divert attention from the danger Formosa’s plant poses to local families. Louisiana has one of the highest rates of cancer in the nation due to the rapid expansion of dangerous chemical plants like Formosa Plastics that release toxic levels of pollution into the air and water. Now the Taiwanese-based company wants to build the largest plastics plant in North America, which would double the area’s toxic air emissions.

“These charges will have a chilling effect on our democracy unless they’re swiftly dismissed,” continued Lavigne, who is also the Founder and director of RISE St. James. “Every resident of Louisiana should be concerned about this attack on our free speech and our First Amendment rights.”

Lavigne joined with freedom of speech advocates today to announce a new coalition and website to defend democracy against these First Amendment attacks. The group urged concerned citizens to visit the website to learn more.

The establishment of the Alliance comes after years of First Amendment attacks by the petrochemical industry in Louisiana, including:

“I consider this retaliatory attack on the victims of environmental racism and their allies to be immoral and unethical,” said Pastor Gregory Manning, a member of the Greater New Orleans Interfaith Climate Coalition and the Alliance. “We have seen clear displays of the unjust intimidation by industries and law enforcement which use inaccurate and unfair characterizations of non-violent incidents. The charges brought against our allies are manipulative and fabricated and should be immediately dismissed.”

Those being arrested today for confronting Formosa include Anne Rolfes and Kate McIntosh. They were charged with “terrorizing” under Louisiana Revised Statute 14:40.1, which carries a punishment of up to 15 years and a fine of $15,000. They’re being represented by Pam Spees, Barrington Neil, Rachel Conner and Bill Quigley.

“These charges have zero legal merit,” said Pam Spees, an attorney with the Center for Constitutional Rights and native of Lake Charles. “They do not even pass the laugh test. We ask the District Attorney to look carefully at these arrests and reject the charges against these two dedicated advocates as soon as possible.”

There has been an outpouring of support for protecting advocacy and the First Amendment from local leaders, who sided with the Louisiana advocates over Formosa Plastics executives in the First Amendment flap that could ultimately undo efforts by the company by exposing their plans to remove a slave burial ground and the company’s controversial record of violating environmental regulations in other states.

“They picked the wrong fight to start with this ridiculous charge. We know who the real threat to public safety is in this state and it’s the companies that are poisoning our communities; not the people peacefully trying to protect them,” said retired Lieutenant General Russel Honore, Founder of the Green Army.