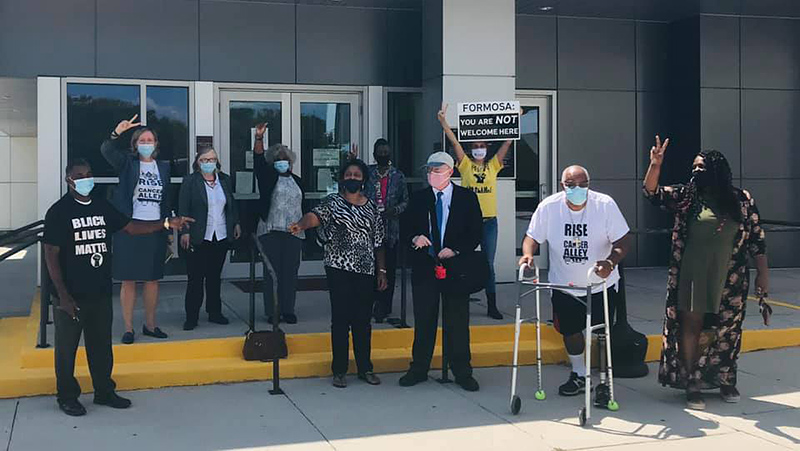 Opponents of Formosa Plastics’ massive proposed petrochemical complex in St. James Parish, Louisiana filed for a preliminary injunction today to block construction of the project. The proposed facility would be one of the largest plastics plants in North America.

The Taiwan-based plastics conglomerate has refused requests to postpone construction despite a high COVID-19 fatality rate worsened by pollution, two pending lawsuits over the project’s flawed approvals, the discovery of unmarked graves of enslaved people on the site and the facility’s public health impact on the parish’s 5th District, where 90% of the residents are African American.

“If they don’t stop this project, we won’t be able to live. We won’t be able to breathe the air without getting sick,” said Sharon Lavigne, president of RISE St. James. “If the court cares about this community and wants to save our lives, it will stop this polluting chemical plant.”

The injunction was filed today in federal district court in Washington, D.C. by the Center for Biological Diversity on behalf of RISE St. James, Healthy Gulf and the Louisiana Bucket Brigade. District Judge Randall D. Moss, who presides over the coalition’s federal lawsuit challenging the project, is expected to rule on the injunction within a few weeks.

“We need the court to halt construction of Formosa Plastics’ petrochemical complex. This community is struggling to stay safe and healthy,” said Julie Teel Simmonds, an attorney at the Center. “This is a battle against environmental racism and a project that will double the air pollution in a Black community. It’s about protecting wetlands and historic resources. We expect to prevail in our lawsuit, and we don’t want Formosa to harm this community before we get our day in court.”

Formosa’s plant would turn fracked gas into pellets used to make single-use packaging and other plastic products. It would drastically increase toxic pollution in a region already known as Cancer Alley or Death Alley because of chronic health problems related to industrial pollution.

“This project is a climate killer, and deathly for residents and fisheries, even before we consider that industrial sites are one of the central vectors for spread of the virus in Louisiana” said Scott Eustis, community science director at Health Gulf. “If history is any guide, continuing construction will mean the influx of many workers from areas in Texas where COVID is exploding. Formosa will spread the virus into St James if it continues.”

A federal judge in Texas last year called Formosa a “serial offender” for illegally discharging billions of plastic pellets into local waterways from its Point Comfort Plant, approving a record $50 million settlement in a Clean Water Act lawsuit brought by local activists. Two Louisiana activists who delivered boxes of that plastic pollution evidence to local oil executives in December 2019 were arrested last month on felony charges of allegedly “terrorizing” an oil lobbyist who complained to police about receiving a box.

“Formosa Plastics has not only devastated the bays and waterways of our neighbors in Texas, it has ignored our concerns about polluting Louisiana. But we won’t be silenced or bullied,” said Anne Rolfes of the Louisiana Bucket Brigade. “No amount of intimidation or slick public relations can hide the fact that this plant is a disaster and should not be built.”

Louisiana residents are still dealing with a severe COVID-19 outbreak that has killed more than 3,200 Louisiana residents, about 53% of them Black Americans, who have been disproportionately harmed by the pandemic. A Harvard School of Public Health study found that even a slight increase in air pollution results in increased fatalities from COVID-19.

Local groups and national environmental organizations filed two lawsuits challenging the Formosa project earlier this year — one over its federal permits and one over its state air permit. Opponents also uncovered records of unmarked graves of enslaved people on the site and have urged Formosa to protect them and for parish officials to reconsider their approval of the project.

The project would emit 800 tons of toxic air pollution each year, doubling toxic air emissions in St. James Parish and more than tripling the levels of cancer-causing chemicals in the region. The petrochemical complex would contain 14 plants spanning 2,500 acres along the west back of the St. James Canal and Mississippi River, into which plastic and toxic water pollutants would be discharged, flowing past New Orleans into the Gulf of Mexico.

The Center for Biological Diversity is a national, nonprofit conservation organization with more than 1.7 million members and online activists dedicated to the protection of endangered species and wild places.

RISE St. James is a faith-based organization working to protect the land, air, water and health of the people of St. James Parish from the petrochemical industry.

Healthy Gulf is a regional nonprofit whose purpose is to collaborate with and serve communities who love the Gulf of Mexico by providing the research, communications, and coalition-building tools needed to reverse the long pattern of over exploitation of the Gulf’s natural resources.

What: Press conference on a request for a preliminary injunction to block Formosa Plastics from starting construction on one of the biggest plastic plants in North America.