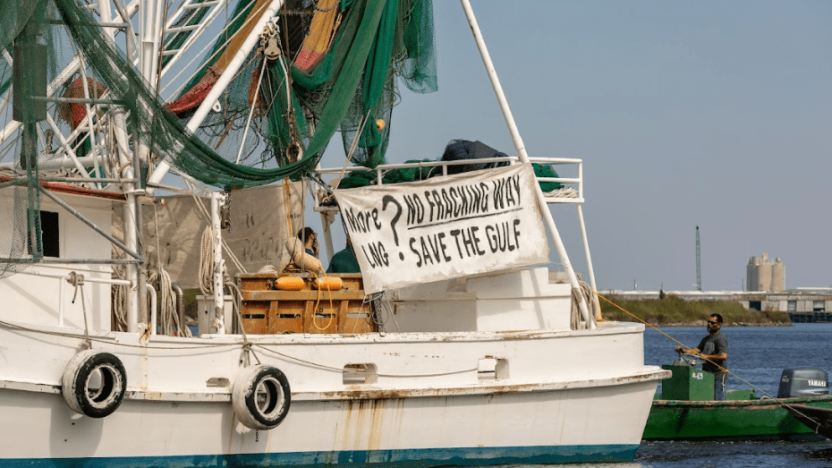 Ahead of the meeting, Anne Rolfes, the Executive Director of the Louisiana Bucket Brigade, released a statement calling on Chairman Phillips to live up to his public statements and halt all future liquid natural gas export terminal construction: The group released this report last week detailing the harm posed by the facilities currently operating.

“With the beginning of a new year, FERC and its new Chairman Willie Phillips have an opportunity to change course and stick to their word. Chairman Phillips himself expressed concern that Commonwealth Liquified Natural Gas Terminal (LNG) would place ’a significant burden’ on any community and would be particularly devastating to the small town of Cameron. And yet, knowing the harm it would cause to local communities, he approved the project.

Louisiana is at the epicenter of a liquid natural gas export terminal buildout that, if FERC allows it to proceed, will decimate our fishermen and our seafood industry, destroy our coastal wetlands, and displace the people who’ve lived in Southern Louisiana for generations. It is a radical transformation of the Louisiana coast and would turn Cameron Parish into an industrial wasteland. However, it’s not just Louisiana. The entire Gulf Coast is under siege as the oil and gas industry attempts to turn our region into a colony that sucks oil out of the ground, ships it overseas and sacrifices our people and homes in the process.

If Phillips truly cares about ’mitigating impacts on communities’, he’ll stop giving blanket approvals to the export terminals plaguing the Gulf Coast. Chairman Phillips, as someone who’s also from the Gulf Coast, we need you to stick by your word and your convictions and use your new position of leadership to halt the construction of liquid natural gas export terminals.“

In November, then Commissioner Phillips released a concurrence with FERC’s decision to approve the construction of Commonwealth LNG. This statement followed a visit to the region in which the Commissioner offered support and concern to local communities.  However, in the concurrence, Phillips said he was ’concerned with our approach to mitigating impacts on communities, especially those already enduring negative impacts from industrial development.’

According to this month’s meeting’s agenda, FERC will consider certificants LA Storage, LLC and Rio Grande LNG, LLC, two projects that will exacerbate the liquid natural gas export terminal buildout in Louisiana and the Gulf Coast.

There are currently three operating liquid natural gas export terminals in Cameron and Calcasieu parishes in Louisiana: Sabine Pass, Calcasieu Pass and Cameron LNG. There are proposals to build or expand 13 more gas export terminals in Louisiana, and 25 nationwide. Local residents are pushing back against these terminals and calling for investments in renewable energy, such as wind and solar power, in an attempt to save their communities from the dangerous gasses these terminals release and the worsening effects of climate change they will cause.

Elon Glickman, 818-669-2859, elon@redcypressconsulting.com, on behalf of the Louisiana Bucket Brigade.