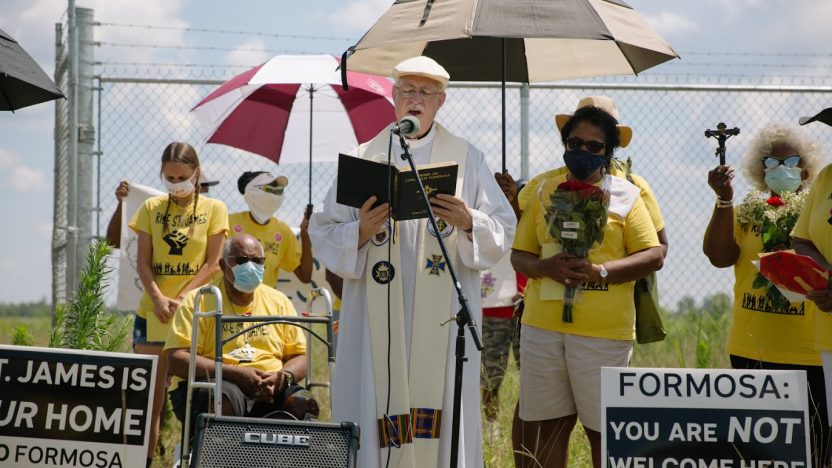 St. James residents today re-asserted their rights to visit burial grounds on property owned by Formosa Plastics, a Taiwanese company that plans to use the property to build one of the largest plastics facilities in the world. In a letter sent to the company today, St. James residents invoked the Louisiana Constitution that establishes the right of people to honor their cultural origins. Louisiana law also forbids a landowner from denying access to cemeteries. “They don’t know the law. The law says that they can’t deny us any access,” said Sharon Lavigne, President of RISE St. James. “I feel like that’s sacred ground, hallowed ground, those are our ancestors. There are people there, we should be able to honor and respect the dead.”

The letter today, sent by counsel at the Center for Constitutional Rights (CCR) on behalf of Rise St. James and Ms. Lavigne, was in response to Formosa’s denial of Ms. Lavigne’s request to visit her ancestors on the site. Formosa Plastics’ public relations spokesperson sent a letter to Ms. Lavigne in early May, invoking COVID-19 and “safety concerns” as the reason to deny the visitation, without explaining how laying flowers on a grave contravenes health and safety. The letter provided no information about when a visit might be possible.

Formosa Plastics’ denial included inaccurate information about the burial grounds and used the very conditions of slavery – undervalued Black lives buried in anonymity – to cast doubt on local residents’ connections to ancestors. The letter establishes an impossible threshold for local residents to provide “documents or specific information” to prove that their ancestors remains are on the site. “Hundreds of people were enslaved on the plantations that existed where Formosa wants to build and they didn’t have a choice in where they were buried or whether their graves were memorialized,” said Pam Spees, Senior Staff Attorney at CCR. “Their descendants have been denied the opportunity of having a place to go to pay respects and connect with their past, which is why the discovery of these sites is so significant. So far Formosa has shown a crass insensitivity and inability or unwillingness to fully grasp just how important this is for people in the community.”

In March, RISE St. James and CCR released an archeological report that shows as many as six cemeteries likely containing the remains of enslaved people may exist on property slated for construction by Formosa Plastics. The comprehensive and detailed report was prepared by expert archaeologists who concluded that Formosa’s archeologists had repeatedly looked in the wrong place for graves in one of the cemeteries, and that there were four other potential cemeteries that should be investigated.

In December of 2019, RISE St. James announced the discovery of graves on the property, a fact that Formosa Plastics representatives knew but failed to disclose to parish officials while their land use application was under consideration.

Members of RISE St. James and their supporters are planning a ceremony on the land on June 19th or Juneteenth, the commemoration of the day people in parts of the South belatedly learned of their emancipation..