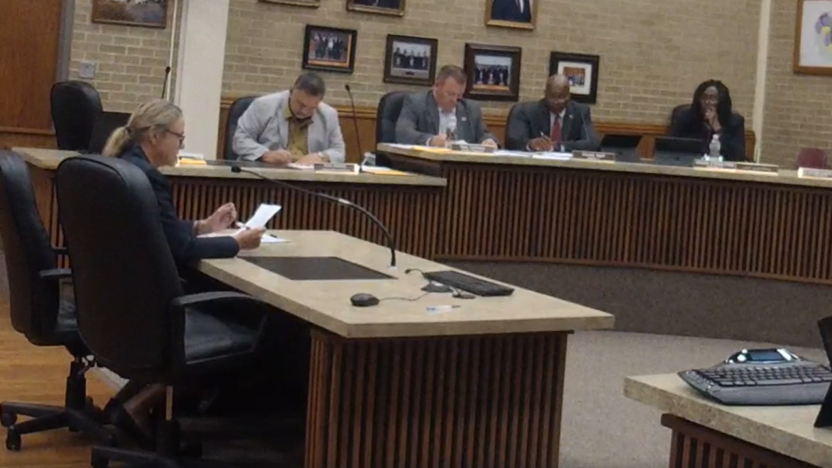 Hello and thank you for letting me present.

I made a presentation to the Council in January calling attention to Formosa Plastics’ false assertion that it had reconfigured its site plan and moved certain plants away from the St. Louis Academy and residences as a measure to protect the community “[a]fter consultation and discussion with the Parish.” Councilman Cooper then asked the Council’s attorney, Vic Franckiewicz, to investigate. In February, Mr. Franckiewicz reported back to the Council, apparently relying on information that he had received directly from Formosa. We  obtained that information through a records request and Formosa actually concedes (rather than refutes) our point: Formosa did not reconfigure its site plan in response to the Council’s concerns.

But not only did the information that Formosa supplied confirm our concerns, it raises new ones. That is, Formosa claims that before it submitted its land use application to the Planning Commission, it moved plants closer to its western boundary away from [the St. Louis Academy] and residences “as one of several general steps [the company] had previously taken to enhance the health and safety of the community.” This statement is completely disingenuous. What Formosa actually did when it reconfigured its site plan was swap one hazard for another. While it moved one of its planned ethylene crackers from the eastern side to the western side of its 2300-acre site, it also moved one of its planned ethylene glycol plants and its associated flare from the western side to the eastern side of its site closer to the school and residences.

Moving an ethylene glycol plant closer to the elementary school cannot, under any stretch of logic, constitute a step “to enhance the health and safety of the community” as Formosa Plastics claims. Why is that? It is because the ethylene glycol plants are the source of the Formosa’s enormous ethylene oxide emissions. And this is something that should worry the Council.

Ethylene oxide is a potent human carcinogen, the effects of which have not been fully understood until recently. In fact, ethylene oxide has caused a national stir. And EPA and local governments are working hard to reduce or eliminate emissions around the country. An Illinois law now prohibits the construction of new ethylene oxide facilities within 15 miles from a school or park in counties with populations less than or equal to 50,000. In contrast, LDEQ has authorized Formosa Plastics to spew enormous amounts of ethylene oxide just one mile from the St. Louis Academy, a public elementary school whose student population is 99.9 percent Black, and even closer to residences across the Mississippi River. So instead of reducing ethylene oxide emissions, LDEQ has authorized what would be (ifbuilt and operated) one of the largest sources of the ethylene oxide emissions in theentire country right here in St. James Parish.

LDEQ refuses to adopt EPA’s cancer risk threshold for ethylene oxide, which is based on the best available science and 10 years of peer-reviewed studies. Instead, LDEQ is allowing Formosa to emit ground level concentrations of ethylene oxide into areas of District 5 that are up to 20 times EPA’s acceptable risk threshold for cancer. And these areas of District 5 are classified as “Residential Growth” by the Parish’s Master Land Use Plan. So while the Parish has decided that there should be more homes and people directly downriver of Formosa’s site, that area will experience – if Formosa builds and operates – ethylene oxide emissions that far exceed what EPA has determined is safe. While this parish is known to embrace industry, it has also been known to embrace its residents over industry – at least in the majority white area of Paulina when Wolverine tried to get permits to build a crude oil terminal. The Parish went to bat for that community, passing resolution 13-176 opposing the construction of Wolverine Terminals in Paulina and pleading with LDEQ to deny the application. In its fierce opposition, the Council said: “[t]he proposed construction of Wolverine Terminals . . . causes health concerns to existing residents within close proximity of the proposed facility.” The Council then said Wolverine Terminals must “select a new site better suited for their proposed operations.”

The majority Black residents of District 5 likewise should be able to enjoy the same protection from the Parish. The Council has the power and responsibility to “protect[] . . .the general welfare, safety, [and] health” of all the people in the Parish, which includes taking action to rescind its approval of Formosa Plastics’ land use application.