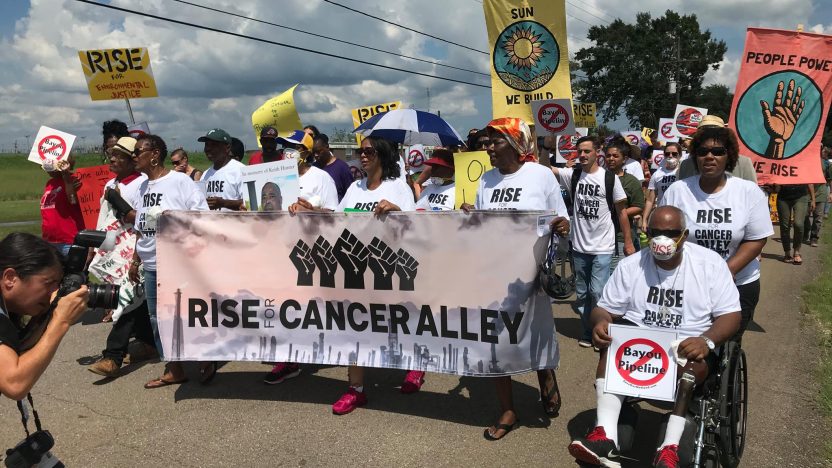 On Tuesday, December 8th, Governor John Bel Edwards announced yet another foreign chemical plant proposed for Cancer Alley in Geismar, Louisiana: Mitsubishi Chemical Corporation (MCC). In the last decade alone, toxic emissions have increased in Ascension Parish by 109%. The environmental injustice could not be more clear as Mitsubishi joins the list of chemical plants welcomed to pollute communities already devastated by industry.

Residents of Geismar are inundated with toxic chemical facilities including BASF, Occidental Chemical Corporation, Shell Chemical, Rubicon, Westlake Chemical, and Air Products and Chemical Inc. There are over 5,000 residents who live within a three mile radius of Mitsubishi’s proposed site, and according to EPA data, their cancer risk due to air pollution is higher than 98 percent of Louisianans.

Just miles from Geismar is the predominantly Black town of Gonzales. Like residents in the 5th District of St. James Parish, the constant stream of new chemical plants threatens the health and property values of local families.

The state of Louisiana has already offered Mitsubishi Chemical $4 million of Louisianans’ tax dollars to build in Geismar. Along with the $4 million grant, MCC will likely receive industrial tax exemptions, continuing the legacy of polluting and impoverishing the communities in which chemical plants operate in Cancer Alley.

Cancer Alley is full. The existing 150 plus chemical plants that pollute the Mississippi River from New Orleans to Baton Rouge are accountable for the most toxic, cancer-causing air in the country. Proposing more chemical plants such as Mitsubishi Chemical Corporation in the community of Geismar is unconscionable, and we will work with local residents to challenge construction of this facility every step of the way.