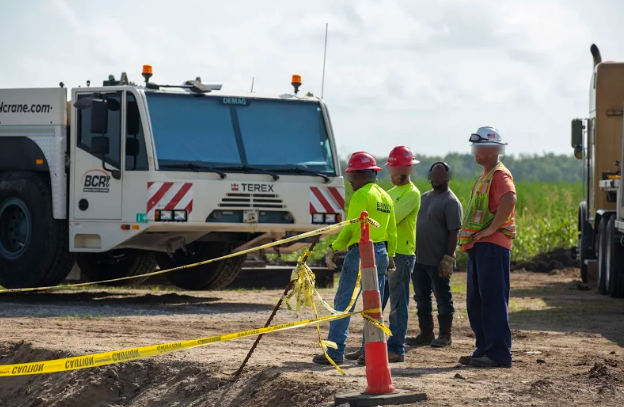 Groups Call for Halt to Construction

RISE St. James and its supporters are calling for a halt to Formosa Plastics’ construction in light of the company’s risk to community health from the repeated, ongoing failure to require workers to follow guidance by state and federal health officials that would significantly reduce the spread of COVID-19. Workers on the site were photographed repeatedly not wearing masks and not adhering to social distance guidelines, violating government guidance as well as the policies stated in Formosa Plastics’ public relations materials. “Governor Edwards issued the stay-at-home order in March, and Formosa violated that – starting construction on the very first day,” said Sharon Lavigne, President of RISE St. James. “And now they are violating the social distancing and the mask wearing. If they are going against the advice of the Governor, they are going to disregard every other law and the people of St. James Parish too. They think that they are beyond the law.”

Formosa Plastics workers were photographed on three separate occasions: August 14th, August 20th, and September 4th, and on each occasion were violating social distancing and mask guidelines. “This was not an isolated incident. The Formosa Plastics workers were consistently working closely side by side, leaning in and talking with each other, and yet we never saw them wearing masks,” said Anne Rolfes, Director of the Louisiana Bucket Brigade, the group that took the photographs. “Formosa Plastics took out a full page ad in the local paper saying it would go above and beyond CDC guidelines, but the workers aren’t even taking the most basic protections. This is Formosa’s management failure – not the individual workers or a contracting company – and it further exposes the company’s lawlessness, irresponsibility and disregard for the health and safety of St. James Parish residents and its own workers.”

Seven organizations signed a letter to the Fire Marshal and the Department of Health, the government departments responsible for enforcing COVID-19 protections. The letter cited the high COVID fatality rate in the River Parishes, a rate that has been among the highest in the entire nation. Included in the letter was the St. James Parish Council, the body that has the power to revoke Formosa Plastics’ land use approval. Formosa Plastics also received a copy of the letter.

Click here for the Formosa Plastics (FG LA) safety language from an ad placed in the News Examiner, the local paper in St. James Parish, on June 18, 2020.