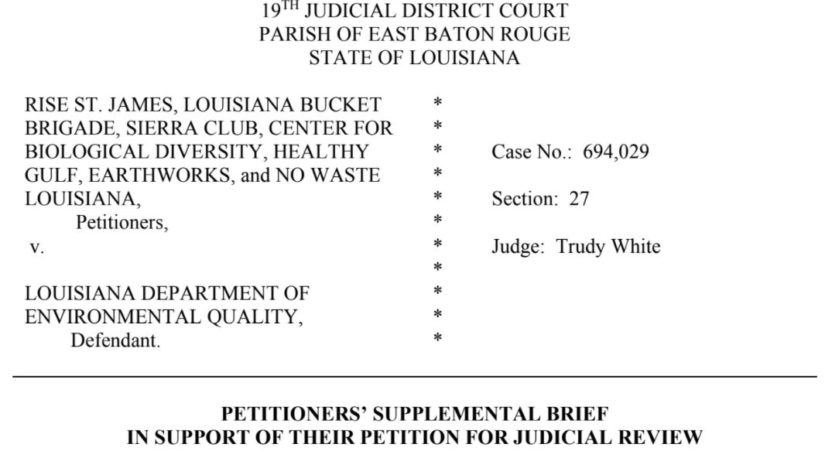 The following are excerpts from the Supplemental Brief that RISE St. James, Louisiana Bucket Brigade, Sierra Club, Center for Biological Diversity, Healthy Gulf, Earthworks, and No Waste Louisiana filed on October 8th, 2021 in regards to the Formosa air permit case against the Louisiana Department of Environmental Quality (LDEQ). This brief responds to LDEQ’s Supplemental Basis for Decision where it considered the 2019 EJScreen Report for the Welcome community. Read the full brief here.

“The 2019 EJScreen Report [U.S. Environmental Protection Agency’s 2019 environmental justice screening report] for the Welcome community sounds a blaring alarm: this Black and primarily low-income community already faces some of the most disproportionate environmental impacts in the nation – especially the risk of cancer from toxic industrial air pollution. Formosa Plastics would exacerbate that burden, exposing area residents to two-to-three times the cancer-causing pollution that exists there now (p. 2).”

“As the Supreme Court instructed, a court should reverse a decision where ‘the actual balance of costs and benefits that was struck was arbitrary or clearly gave insufficient weight to environmental protection.’ The Court should vacate the permits and order LDEQ to conduct a legally compliant environment justice analysis to determine the full burden Welcome residents would bear if Formosa Plastics builds and operates (p. 3).”

EJScreen is an environmental justice mapping and screening tool that provides the Environmental Protection Agency (EPA) with consistent data and approach methods for both environmental and demographic indicators.

“In its Initial Basis for Decision, LDEQ relied on an outdated 2018 version of EJScreen for its so-called ‘environmental justice analysis’ even though the updated 2019 EJScreen Report was publicly available months before LDEQ issued its decision. The outdated 2018 version of EJScreen that LDEQ relied on in its Initial Basis for Decision incorporates 2011 NATA data, whereas the 2019 EJScreen Report incorporates 2014 NATA data. As discussed in detail below, the 2014 NATA data is consequential because the relative cancer risk for Welcome residents from exposure to toxic air pollutants is much worse than shown in the 2018 EJScreen Report, incorporating the 2011 NATA data (p. 6-7).”

“LDEQ completely ignored race and other demographic information, failed to consider the impact of Formosa Plastics’ operations—along with other major industrial sources in the area that received permits but are not yet operating— when assessing environmental burden, misused EJScreen data, and failed to provide rational support for its findings (p. 7-8).”

a. LDEQ continues to ignore race and other demographic data.

“LDEQ has ignored all evidence in the administrative record that relates to race. It ignored U.S. Census Bureau data showing that District 5 where the agency has authorized Formosa Plastics to build its chemical complex, is 90 percent Black. It has also ignored the St. James School Board report showing the elementary school located a mile from the Formosa Plastics’ site serves a student population of up to 480 children that is 99 percent Black. And LDEQ continues to ignore EJScreen’s demographic information (p. 10).”

b. LDEQ never considered the toxic emissions from the Formosa Plastics’ planned chemical complex in its analysis

“Even though the permits allow Formosa Plastics to emit over 800 tons per year (or 1,600,000 pounds per year) of 22 different toxic air pollutants, including a trio of known human carcinogens (ethylene oxide, benzene, and formaldehyde), nowhere does LDEQ consider the combined effect of these emissions with the toxic pollutants that already overburden the communities in the area. Moreover, LDEQ failed to consider how Formosa Plastics’ enormous complex would affect the character and future development of Welcome, which the parish has designated for ‘Residential Growth’ (p. 12).”

“Not only did LDEQ exclude EJ Indexes and avoid all demographic information, the agency also wrongfully focused on the raw values for the environmental indicators instead of the percentiles. As EPA explains, percentiles actually show how a community compares to others in the state, region, or nation, while raw pollution values may actually obscure the disproportionate burdens the community faces (p. 14).”

“The 2014 NATA Air Toxics Cancer Risk value in the 2019 EJScreen Report has a +24-percentage difference between Welcome and the state average. But instead of conceding that the 2014 NATA Cancer Risk value for Welcome does not support its initial (albeit arbitrary) conclusion that area residents do not suffer a disproportionate risk of cancer from industrial air pollution, LDEQ now disputes NATA’s risk assessment method and offers other arbitrary and baseless arguments to dismiss the data that it had embraced in its Initial Basis for Decision (p. 15-16).”

“LDEQ chose to look at only the three toxic air pollutants (ethylene oxide, chloroprene, and benzene) that it says “result in an estimated cancer risk greater than or equal to 0.5 [additional cancer] cases per million persons” in both the 2011 and 2014 NATA data for the census tract that includes Welcome. LDEQ’s focus on just three pollutants is arbitrary since LDEQ omitted dozens of other toxic pollutants that contribute to cancer risk for the census tract and that are also part of the NATA (p. 18).”

“In addition, LDEQ unreasonably fails to account for the pollutants Formosa Plastics would add back into the air once operating just one mile from an elementary school and residential neighborhoods, while focusing instead on facilities up to 100 miles away. LDEQ failed to even mention that the permits it issued to Formosa Plastics allow the company to emit up to 15,400 pounds per year of ethylene oxide. Indeed, despite the fact that ethylene oxide is a potent carcinogen that EPA is trying to reduce, LDEQ has greenlighted this massive new source of ethylene oxide (one of the largest sources in the whole country) just a mile from an elementary school. (p. 19).”

“[O]nly five percent of people in the state, seven percent of the people in the EPA region, and four percent of people in the whole country have a higher cancer risk value associated with exposure to toxic air pollution when demographics are included. And this is without including Formosa Plastics’ massive addition of toxic air pollutants. Several other EJ Indexes are also extremely concerning, with indexes for exposure to particulate matter (i.e., soot or other particles from the industrial combustion processes), ozone, respiratory hazard index, hazardous waste proximity, and wastewater discharge proximity all over the 90th percentile as compared to the rest of the state. This means that the Welcome community is currently stressed by multiple environmental factors, which comes as no surprise as it exists in the center of the most polluted region of the country – Cancer Alley (p. 23).”

“For all the foregoing reasons, and the reasons expressed in Petitioners’ initial brief, Petitioners ask the Court to reverse LDEQ’s January 6, 2020, final decision granting the PSD Permit and 14 Title V/Part 70 Air Operating Permits, vacate the permits, and order LDEQ on remand to conduct the environmental justice analysis required as a public trustee, and address the other errors discussed in Petitioners’ initial brief (p. 25).”