The Louisiana Bucket Brigade (LABB) has supported fenceline communities in the state for 20 years. Founding Board members Margie Richard of Norco, Dorothy Jenkins and Shonda Lee of New Sarpy, and Founding Director Anne Rolfes incorporated the organization in 2000 with guidance from groups like Xavier University’s Deep South Center for Environmental Justice, Earthjustice, Communities for a Better Environment and the Sierra Club. 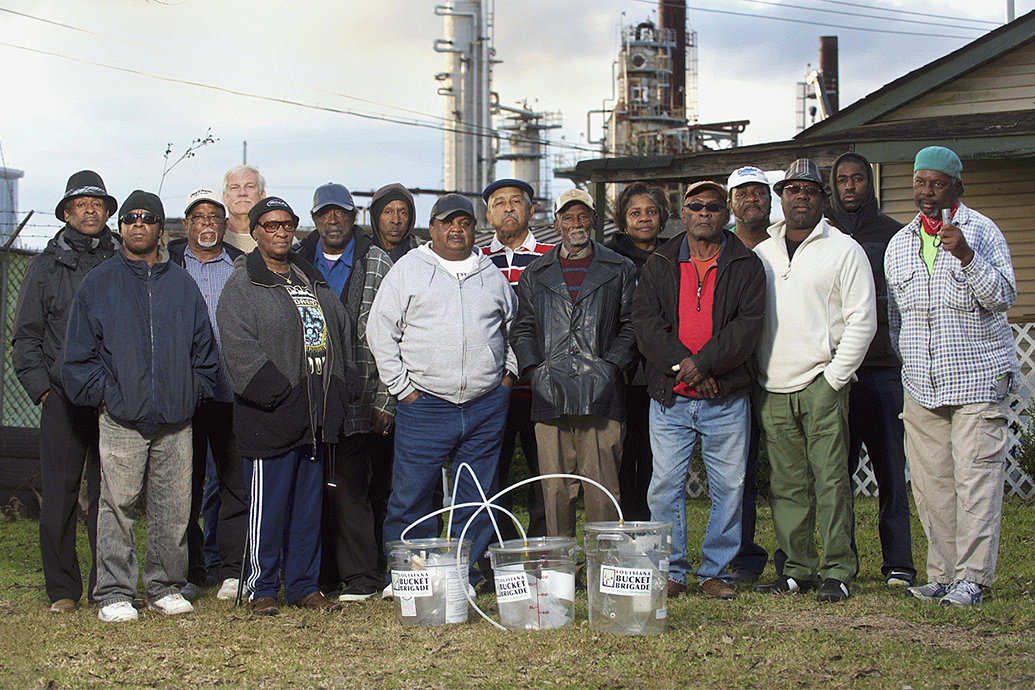 From the first days of our inception, the Louisiana Bucket Brigade was inspired by people in the Niger Delta region of Nigeria who stand up to the devastation of oil production and gas flaring that continues to this day (see our reading list here). Before moving home to Louisiana, Anne Rolfes worked in Benin, West Africa, to document the stories of Nigerians who were attacked and driven out of Nigeria because of their work for justice from the oil industry. This collaboration with the most impacted people has continued; the Bucket Brigade’s core partners are the communities facing the brunt of pollution and illness in Louisiana.

Over the years we have provided technical support in the areas of media, air monitoring, organizing, cartography, accident research and report writing. We also provide faith that we can win and a track record of doing so.


A timeline of our accomplishments

August, 2021: Nucor Steel cancels the expansion for its facility in Romeville, St. James Parish. This win prevents our partners with Inclusive Louisiana from being bombarded with 125 additional tons of hazardous particulate matter into the air.

On August 18th, on a call with the Army Corps of Engineers and RISE St. James, Inclusive Louisiana, and lawyers at the Center for Biological Diversity, we learned that the Army Corps of Engineers is heeding our calls and requiring that an Environmental Impact Statement be conducted for the project. This two-year delay is an important step to killing the project once and for all.

April, 2021: The New Orleans and Westwego City Councils pass unanimous resolutions in opposition to Formosa Plastics. We worked with council members, fishermen and local restaurants, including the Brennan Restaurant Group, to pass these resolutions.

March, 2021: Together with our local and national partners, we generated over 40,000 public comments to the Army Corps of Engineers asking that they fully rescind the permit for Formosa Plastics.

February, 2021: Started bimonthly meetings of the Grassroots Environmental Justice Cohort, with co-facilitation with the Power Coalition for Equity and Justice. This group includes eight groups led by our grassroots partners. For more on this work, visit our EJ Cohort page.

December, 2020: We tested our early warning network, rallying nearly a dozen environmental and citizen advocacy groups to sign onto a letter warning a Japanese chemical conglomerate of the opposition it will face should it decide to move forward with plans for a new plant in Ascension Parish. The letter can be viewed here.

October, 2020: We joined Together Louisiana and a coalition of other environmental and racial justice groups to advocate against Amendment 5, a state amendment that would lock tax loopholes for industry into our state constitution. As a part of this effort, LABB and RISE helped organize a Movement for Black Lives march in St. James Parish on October 17, 2020; 100 people participated in the march.

September, 2019: In collaboration with RISE St. James, the Tulane Environmental Law Clinic and other organizations, we stopped the Wanhua Chemical Plant from constructing in the 4th District of St. James Parish.

June 2017: Protected air quality in St. Rose. The Shell asphalt refinery and tank farm had proposed to release an additional 119 tons of air pollution per year. Our collaboration with St. Rose Community One Voice adn the GreenARMY forced the LDEQ to hold a public hearing, where residents detailed the impacts of the increased pollution. The company cancelled its plans to expand.

May 2017: Louisiana Department of Environmental Quality (LDEQ) agreed to install air monitors in the town of St. Rose.

March 2017: Fenceline neighbors in Louisiana won a Clean Air Act citizen suit. With the representation of our able lawyers at Washington, DC-based EarthJustice, the ruling requires the Environmental Protection Agency (EPA) to review the health threats – cancer risks, chronic respiratory, neurological harm – of short term exposure, as well as install better emission control technology. This has an impact throughout Louisiana, especially for our partners in St. Rose adjacent to Shell.

January and March 2017: In concert with other groups in Louisiana, we rallied 600 people at two public hearings to urge rejection of the proposed Bayou Bridge Pipeline, a 162-mile behemoth that would run across south Louisiana, through the Atchafalaya Baton as well as through Bayou LaFourche, the drinking water source for over 300,000 people, including the Houma Nation. Though the pipeline was built, this organizing provided the foundation for our collaboration in St. James Parish and the ongoing work to stop Formosa Plastics. 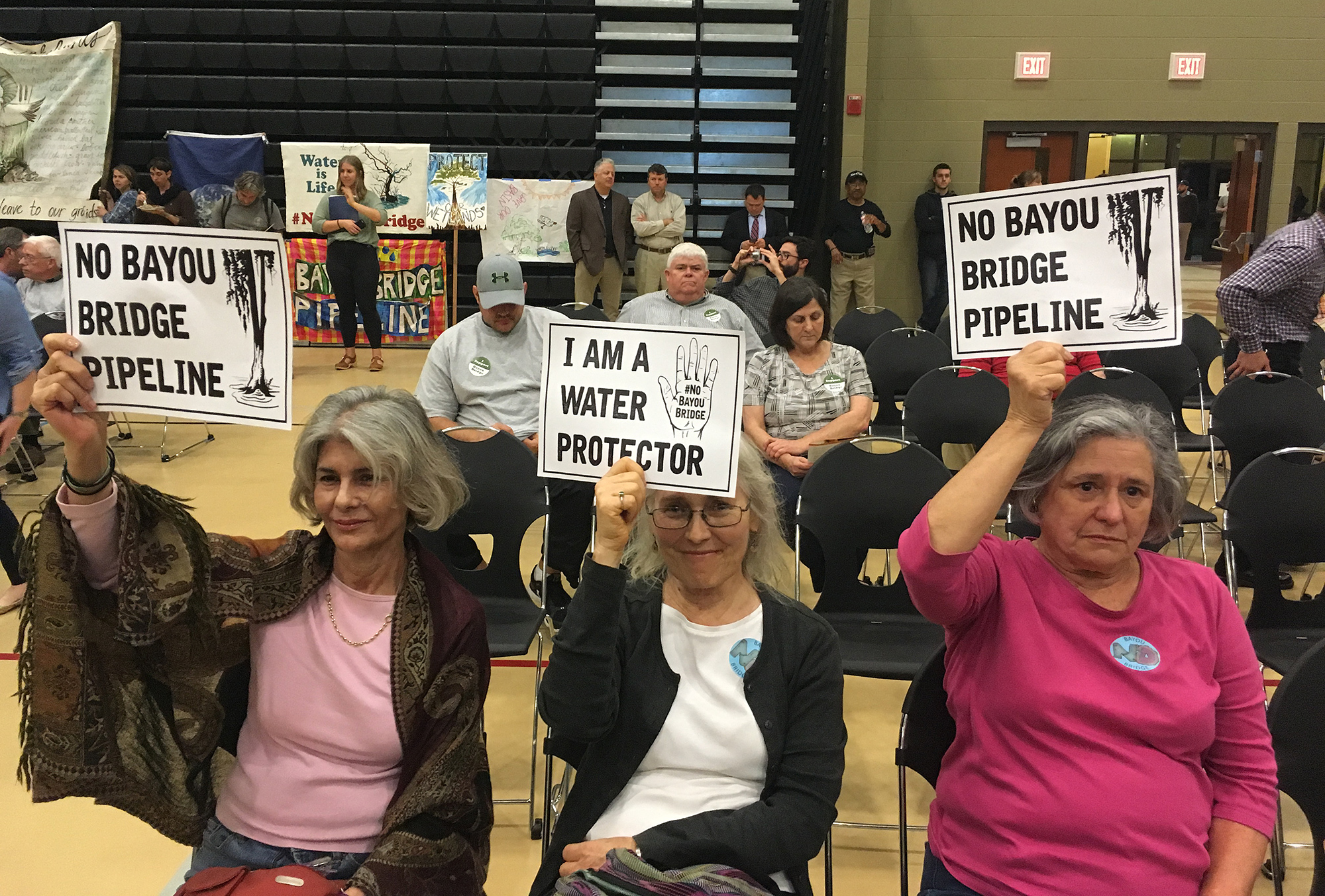 August, 2016: Four people arrested at the New Orleans office of the Bureau of Ocean Energy Management in a civil disobedience action. We also piled flood debris from the August Baton Rouge floods at the entrance to their office. The message to the agency was to end new drilling in the Gulf of Mexico, because DRILLING = FLOODS. 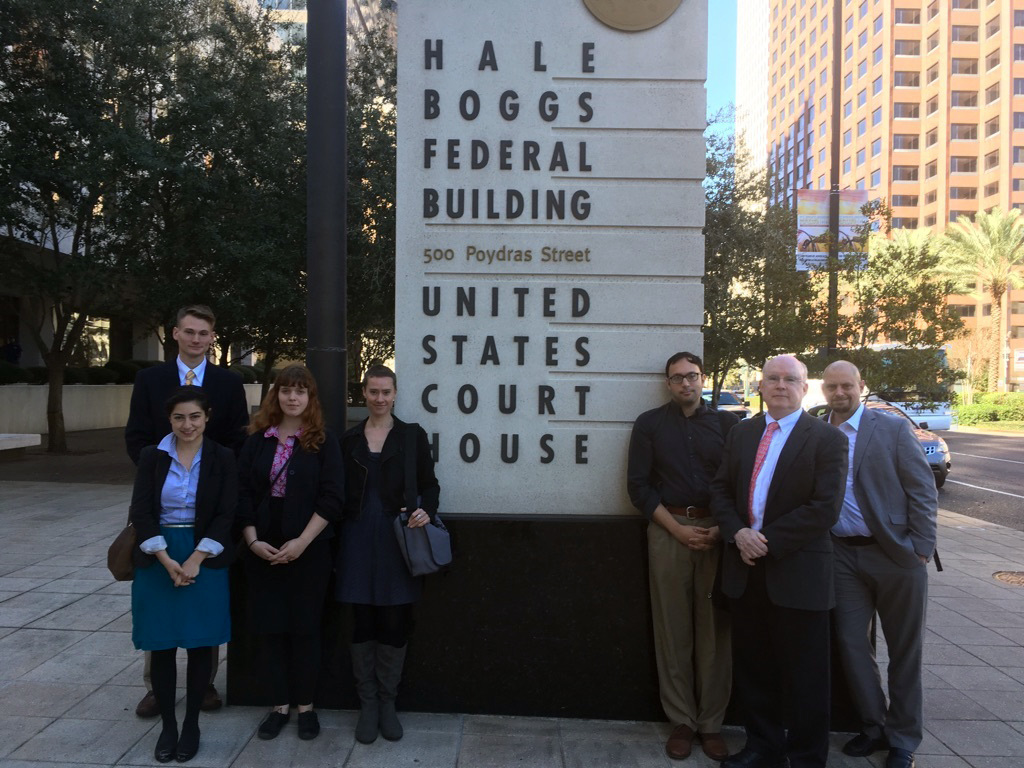 March 23, 2016: On March 23rd hundreds of us were in the Superdome to say, for the first time ever, that we want drilling in the Gulf of Mexico to end. On that day, the federal government was auctioning 43 million acres of our Gulf of Mexico to the oil industry. We took over the auction room inside the Superdome. “The Gulf is not for sale,” was our message. The headlines recognized the moment: “Louisiana is Finally Starting to Rise Up Against Big Oil,” and “Cheers for the Protesters Who Took over an Offshore Drilling Auction.” 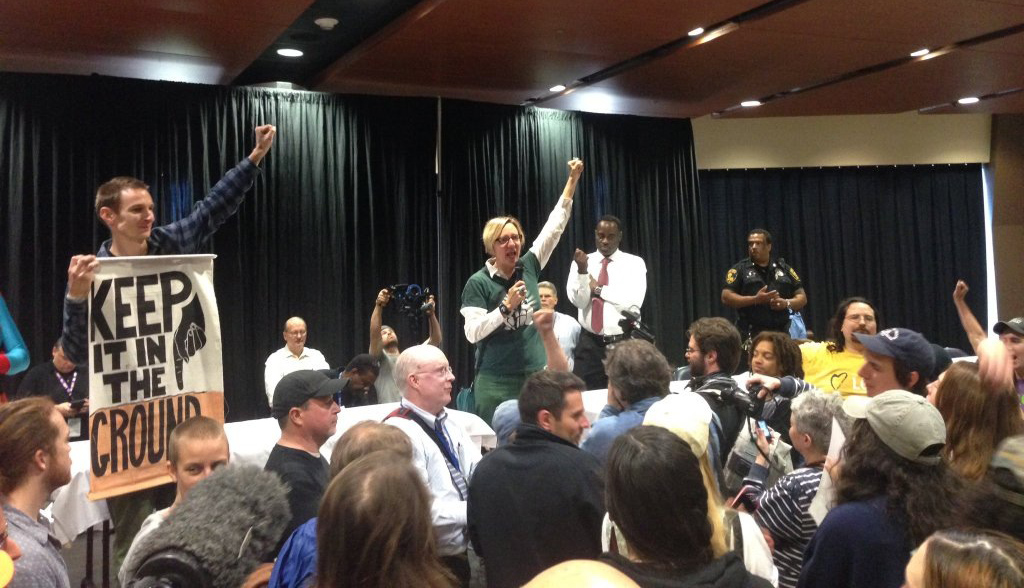 September, 2015: A five year partnership with six groups from around the country and Earthjustice’s D.C. office resulted in the EPA Refinery Rule. It will require, for the first time ever, air monitoring for the carcinogen benzene in fenceline communities as well as a reduction in refinery pollution. This tremendous policy accomplishment was born from the grassroots. We had community representatives in these meetings for the last six years giving insight into what aspects of the proposed rule would and would not work.

April, 2015: One week before the BP anniversary, Louisiana Bucket Brigade (LABB) staff went to BP headquarters with others from the Gulf Coast to talk with the U.S. chairman. He refused to come down, and we only left when we were arrested. We took the BP harms – destroyed fisheries, ruined beaches, broken families – to the heart of their business. We orchestrated this action with Rainforest Action Network and Bridge the Gulf, thereby laying the groundwork for the no new drilling demand and the March 23rd Superdome action.

2014: After a leak from a tank farm made residents so sick they went to the hospital, we helped to organize a new group – St. Rose Community One Voice. LABB staff go to New York and participate in the largest climate march in history. Director Anne Rolfes is among those arrested at Wall Street.

2013: Proudly joined General Russell Honore’s GreenARMY. Transitioned the BP Oil Disaster Map to the iWitness Pollution Map, used by refinery and chemical plant neighbors to report pollution as it happens. According to our global partner Ushahidi, our use of this technology – called crowdsourcing – is the largest collected of community gathered data on environmental problems in the United States. 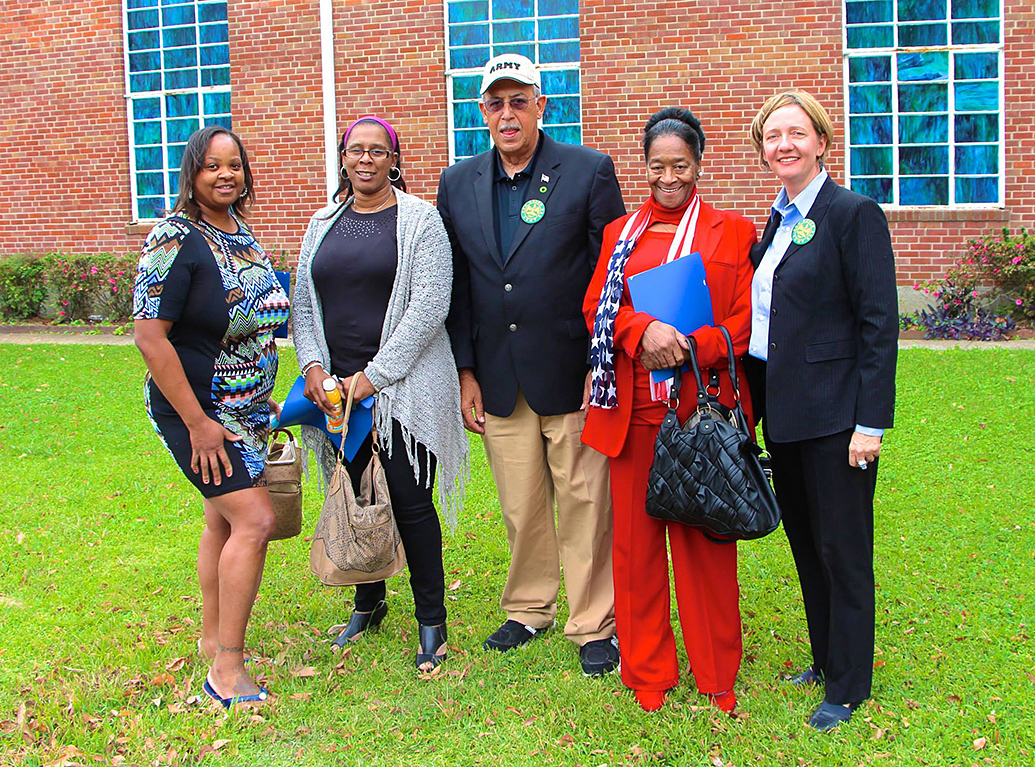 2012: Named to the US Coast Guard’s Community Outreach Subcommittee for oil spills. Petitioned the EPA and the Louisiana governor to increase Louisiana’s Title V Clean Air Act emissions fees. Our Art to Action Program produced two events – for safe jobs and zero accidents – at our state capitol in collaboration with the United Steelworkers.

2010: LABB launched the Oil Spill Crisis Map in response to the BP Oil Disaster, the first-ever use of crowd sourcing and crisis mapping for humanitarian purposes in the United States. LABB also collected 954 health and economic impact surveys in Louisiana towns affected by the spill. This remains the largest face-to-face survey of post-disaster health impacts. 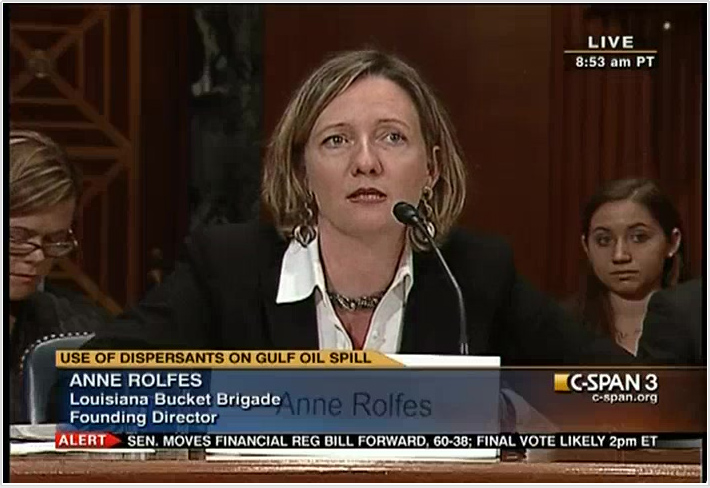 2008: LABB launched the Refinery Efficiency Initiative to reduce refinery accidents at all 17 refineries in the state. The first Fenceline Neighbors Conference was convened this year as well.

2005: In response to legislation developed by the St. Bernard Citizens for Environnmental Quality and LABB, the Louisiana Department of Environmental Quality installed an air monitor across the street from ExxonMobil’s Chalmette Refining. 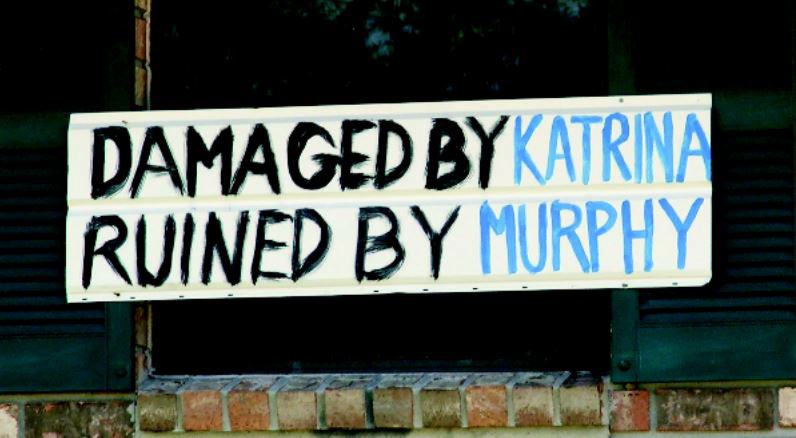 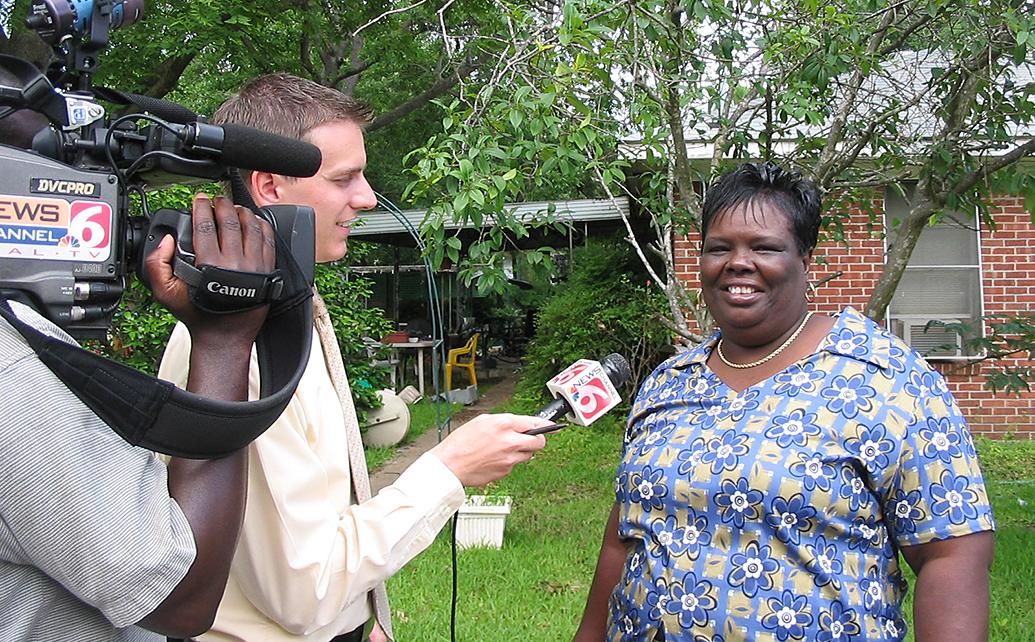 2003: In response to our petition detailing the Louisiana Department of Environmental Quality’s lax enforcement in St. Charles Parish, the EPA Inspector General began an investigation of Louisiana’s environmental programs. Our health symptom survey in New Sarpy confirmed that people had elevated rates of health problems from chemicals emitted by the refinery.

2002: Our collaboration with the Concerned Citizens of New Sarpy documenting neighborhood pollution and publicizing the refinery’s accident rate (more than two accidents per week) resulted in reduced accidents and an EPA Notice of Violation for Orion Refinery. 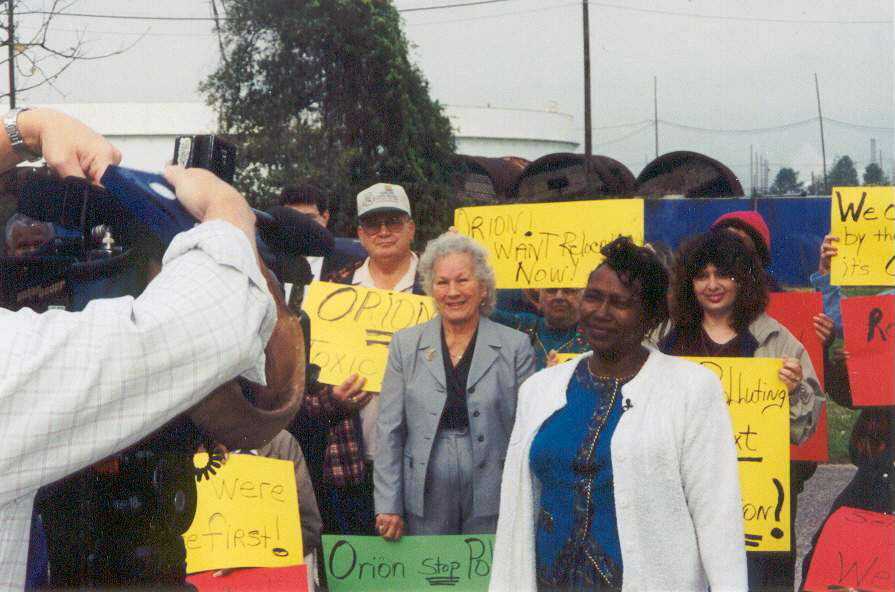 2001: Our collaboration with the Concerned Citizens of Norco and other groups (including EarthJustice and the Deep South Center for Environmental Justice) resulted in Norco residents’ achievement of their long term goal: a Shell buy out of their contaminated property. The state also implemented an air monitoring program in Norco.

Earned over 1,000 stories in newspapers, magazines, books, film and TV featuring Louisiana residents standing up to the petrochemical industry. 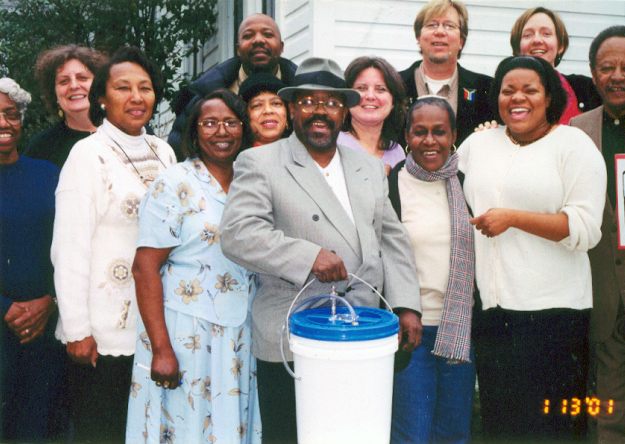