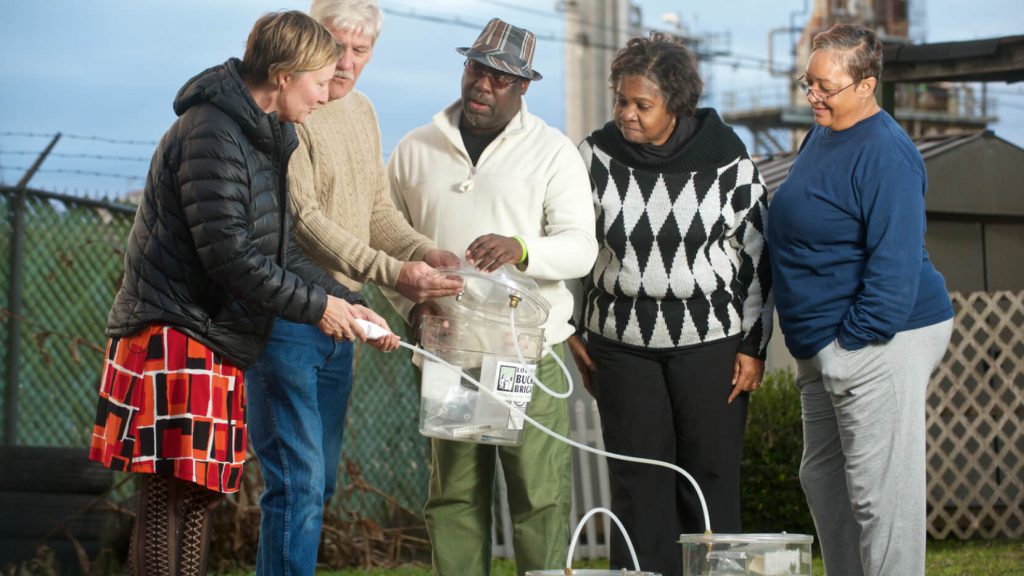 The EPA-approved “bucket” is a simple, easy-to-use tool fenceline neighbors can operate to take air samples. The data produced from these samples is just as good as monitoring data from the EPA or LDEQ and captures emissions from within the communities most affected. This is a powerful experience for community members who are used to being ignored, overlooked and disrespected by corporations and government.

Dorothy Jenkins, President of Concerned Citizens of New Sarpy, used to call the refinery to complain about odors. An operator would tell her not to worry, that the black plume of smoke billowing for hours near her home was not harmful. Then, Jenkins got an air sample bucket. Now, when refinery managers and government regulators tell her there is nothing to worry about, she answers: “Why, then, was there a benzene reading of 14 in my air sample – a reading that violates the state standards?” The bucket, coupled with participatory training on the chemicals emitted at refineries, as well as state and federal regulations for those emissions, gives community members power to hold institutions accountable to provide a safe and healthy environment.

We train community members to conduct hot spot monitoring with the bucket. They monitor when there is a visible problem in the neighborhood, when they fear they are most at risk of chemical exposure.

History of the Bucket 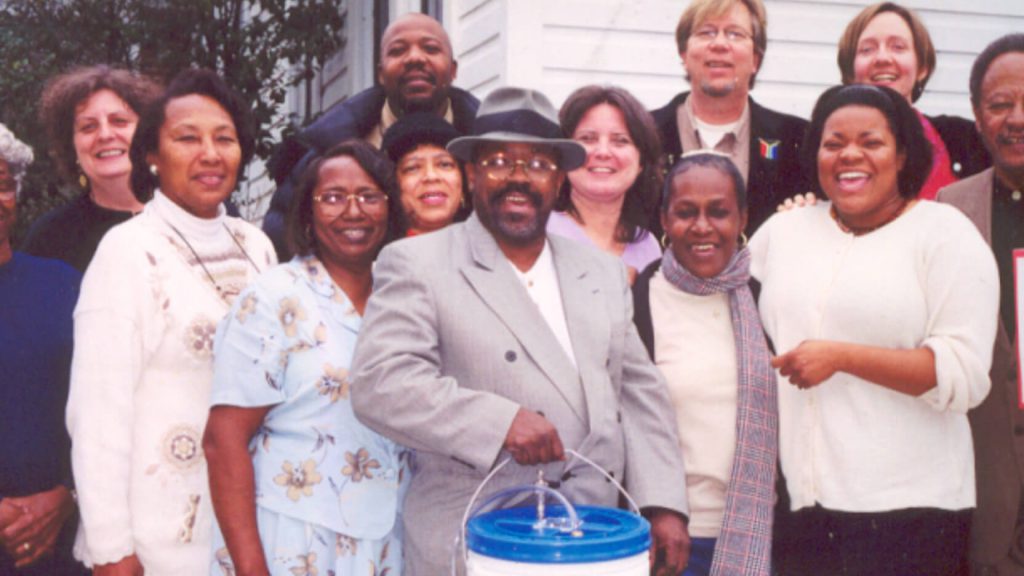 The inspiration for an easy-to-use air sampling device came in 1995, when attorney Edward Masry (depicted in the movie “Erin Brockovich”) got sick from fumes from a petroleum refinery he was suing on behalf of residents of Contra Costa County, Calif. When he called the local, state and federal environmental authorities, they told him that their monitors detected no problem. This angered Masry, whose clients were being exposed to toxic releases daily. He hired an environmental engineer to design a low-cost device, and the bucket was born.

The bucket is a $75 version of a much more expensive device, a $2,000 summa canister. Air is drawn into a Tedlar bag ($15), a non-reactive plastic, inside the bucket. The valve on the bag is then closed, and the bag is shipped overnight to a laboratory for analysis.

At $500 per sample, the lab analysis is the most expensive part of the operation. The air from the bag is run through a Gas Chromatograph Mass Spectrometer, which compares the “fingerprints” of the sample with the fingerprints of about 100 toxic gases in the computer library.

Working closely with Ed Masry, Denny Larson of Communities for a Better Environment promoted the use of the buckets in other communities exposed to toxic air emissions. Larson produced a community manual to educate fenceline neighbors on how to build and operate their own buckets. The manual helped spread the buckets throughout the refinery belt of Contra Costa County in California, and eventually to Louisiana.

The biggest hurdle was getting authorities, who belittled the idea of citizen bucket brigades, to accept the results. Larson met with EPA Region 9 officials, including then-administrator Felicia Marcus, in 1996 and asked the agency to approve and fund bucket air sampling. To its credit, EPA Region 9 invested in a quality assurance evaluation of the bucket results and ended up accepting them. With the EPA approval, Larson was able to work with grassroots groups around the country to launch local bucket brigades.

Although started in California, the greatest success of the bucket has been in Louisiana. The largely African-American community of Mossville in Calcasieu Parish is surrounded by more than 53 industrial facilities, more than 40 of which are located within a 10-mile radius. Tired of being the victims of lackadaisical government enforcement, which tolerated frequent accidental toxic releases, Mossville’s fenceline neighbors organized and began taking samples using the bucket in September 1998. The first samples detected violations of Louisiana standards for vinyl chloride, EDC and benzene, a carcinogen. Subsequent samples were even worse. One sample found benzene in excess of 220 times the state’s standard.

This got the attention of the press and the enforcement authorities. The EPA Region 6 administrator made a public tour of the area. Region 6 moved in with their own monitoring devices that confirmed pollution levels even higher than the buckets had detected. Fines were levied and state-of-the-art fenceline monitoring devices were required of some polluters.

In 1999, Anne Rolfes moved back to Louisiana after collaborating with the Ogoni in Nigeria on the oil industry’s destruction of the Niger Delta. Anne was interested in doing work along Cancer Alley and addressing the industry’s abuse in her home state. She learned about success the Mossville community had with the bucket, and was inspired to get buckets to more communities. After trying to get existing organizations to incorporate the bucket as a tool, she realized that there was a need for a new group dedicated to citizen monitoring. The founding board included Margie Richard (Norco), Dorothy Jenkins (New Sarpy) and Shonda Lee (Norco), all leaders along Cancer Alley. They founded the Louisiana Bucket Brigade in 2000. The Beldon Fund, which had been supporting Communities for a Better Environment, wrote the first check to the organization for $50,000.

Community members who live next to oil refineries and chemical plants are constantly told by industry officials that their operations are safe and that the air is healthy to breathe. The Louisiana Department of Environmental Quality and the federal Environmental Protection Agency often lack appropriate and consistent methods of monitoring air quality – their monitoring stations are often sporadic and don’t all test for the same chemicals. Furthermore, the placement of monitoring stations is a decision made in conjunction with industry, which often pushes for strategic locations that see the least amount of pollution.

While industry offers assurances of safety, they usually lack the data to prove it. Monitoring is the only way to confirm what is in the air.

What to Ask After a Chemical Release

When industry spokespeople tell you that nothing harmful was released, that nothing crossed the fenceline, that residents only imagined their health symptoms, or give other assurances after an accident, you should demand proof and ask, “How do you know?” If you are a community member, ask questions, get information, call the media and get your side of the story told. If you are a member of the media, probe the company’s statements. Ask them what proof they have that chemicals did not go beyond the fenceline.

Get the following information:

*These are the government agencies in Louisiana with which the facilities are legally required to correspond. Communities outside of Louisiana should determine which agencies in their area are responsible for this information.