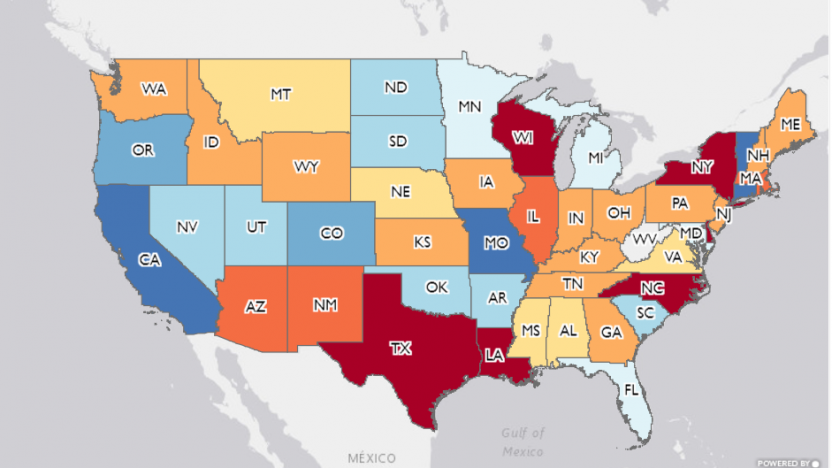 Louisiana Ranks Among Worst in U.S. for Cutting its State Environmental Agency in new EIP report

During a decade of cuts at EPA fueled by rhetoric that environmental responsibility should be shifted from the federal to state level, 30 states cut funding for their own environmental agencies and 40 reduced their staffing, according to a new study of state budget records.

Louisiana had among the worst records in the U.S., slashing the funding for pollution control programs at the state Department of Environmental Quality by 35 percent from fiscal 2008 to 2018, when adjusted for inflation, and staffing at the agency by 30 percent, according to the Environmental Integrity Project report, “The Thin Green Line: Cuts to State Pollution Control Agencies”.

Only two states cut the funding at their environmental agencies as much or more over this time period, Wisconsin (36 percent) and Texas (35 percent), state records indicate.

“The Trump Administration has been trying to roll back EPA’s authority and funding by arguing that the states will pick up the slack and keep our air and waters clean,” said Eric Schaeffer, Executive Director of the Environmental Integrity Project (EIP).

“This is just a shell game, however,” said Schaeffer, former Director of Civil Enforcement at EPA, “because state agencies are often badly understaffed and the EPA workforce is already at its lowest level in more than thirty years.”

The cuts at LDEQ came during a decade of rapid expansion of the state’s chemical industry and increased damage to the Bayou State from climate change and coastal flooding.

“The Louisiana Department of Environmental Quality needs two things: more money in its budget and the will to enforce the law,” said Anne Rolfes, Director of the Louisiana Bucket Brigade, an environmental organization. “Demoralized employees lack the proper funding to do their jobs, and they are vulnerable to industry pressure to hurry permit approvals and cut corners.”

Funding for the LDEQ’s pollution control programs plummeted from $192 million in 2008 to $125 million in 2018, when adjusted for inflation. Over same period, the overall state budget for Louisiana shrank by much less, only 15 percent. LDEQ eliminated 296 full-time equivalent positions, with staffing declining from 994 full-time-equivalent positions in fiscal 2008 to 698 in 2018.

This lack of environmental prioritization should not be surprising: A 2011 EPA Inspector General report found Louisiana’s enforcement of environmental laws to be among the worst in the country.

The cost of environmental degradation is more tangible in Louisiana than in almost any other state. Driven by oil and gas industry development and rising sea levels, more than 2,000 miles of the state’s southern edge have literally washed away into the Gulf of Mexico, with a football disappearing about every 100 minutes.

Below are some of the major environmental challenges facing Louisiana that require a robust environmental protection agency, according to the Environmental Integrity Project’s report:

Nationally, according to the Environmental Integrity Project report, the White House and Congress reduced EPA’s funding and staffing for pollution control and science programs by 16 percent from 2008 to 2018, when adjusted for inflation.
During this period, many states slashed their own environmental agency funding by an even greater percentage– including Louisiana, with its 35 percent funding cut to the LDEQ, and 30 percent staffing cut.

Across the U.S., the steep reductions at state environmental agencies and EPA came despite evidence that many environmental violations are resulting in no enforcement or penalties.

For example, EPA records show there are 2,098 sewage plants, factories, and other industrial sites in the 50 states that are currently in significant violation of federal air, water, or hazardous waste pollution control laws, including 1,255 that have been in violation every quarter continuously for the last three years. Of these 1,255 sites with chronic violations, 80 percent (1,008) are in states with environmental agencies that have suffered staffing cuts, according to the EIP report.

The Environmental Integrity Project examination of state budget records from 2008 to 2018 found:

For an online data map with budget and staffing data for all 48 lower U.S. states, click here.

The Environmental Integrity Project is a nonprofit, nonpartisan organization based in Washington, D.C., and Austin, Texas, that protects public health and the environment by investigating polluters, holding them accountable under the law, and strengthening public policy.