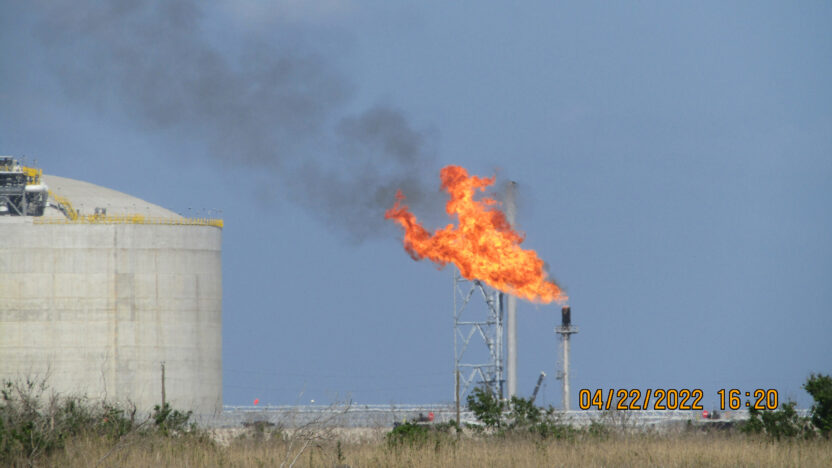 The terminals named in the 2nd report of the Gas Export Spotlight Series, Sempra Energy’s Cameron LNG and Venture Global’s Calcasieu Pass, threaten to turn Cameron Parish into an ‘industrial wasteland’, decimating the coast and fishing grounds, and venting pollutants, including benzene, into the atmosphere

Residents living in the shadow of the liquid natural gas terminal buildout gathered on Tuesday to present findings from a new report , Gas Export Spotlight: Operational Problems at Cameron LNG and Calcasieu Pass. Travis Dardar, a local indigenous fisherman and shrimper, joined John Allaire, a retired environmental engineer with BP and Amoco, to reveal that Cameron LNG and Calcasieu Pass are underreporting accidents at their facilities and ask local, state, and federal agencies to halt construction of any more liquid natural gas export terminals.

Dardar and Allaire spoke from Allaire’s property where you can see the flares at the Calcasieu Pass export terminal. These flares burn off dangerous pollutants that are released due to an accident at the facility. These accidents result in the release of dangerous, toxic pollutants into local communities and point towards operational failures. According to the report, Cameron LNG’s thermal oxidizers have failed every two months since exports began at the facility. This operational failure results in the unpermitted venting of methane, carbon monoxide, pentane, and benzene directly into the atmosphere, creating a vapor cloud that touches 737 households.

In addition to these operational failures, the facility’s construction has also decimated the local fishing and shrimping industry and is making the surrounding area uninhabitable.

“Behind me is one of the many plants that has destroyed my life and the lives of many other fishermen,” said Travis Dardar during the press conference, “They come over and take over everything…It’s really like an invasion…The fishing industry has sustained my family and my life. There’s no life for fishermen if this is done. They say they’ll respectfully build through oyster reefs but how can you do it respectfully? If they build this here then it will be the end of commercial fishing.”

This report is the second in Louisiana Bucket Brigade’s Gas Export Spotlight series, which investigates the hazardous, and often unreported accidents occurring at Southwest Louisiana’s liquid natural gas export terminals. The previous Gas Export Spotlight focused on the fast-tracked construction of Venture Global’s Calcasieu Pass and the operational problems that rushed construction timeline may have caused. Since that report was released in July, Venture Global has continued its near constant flaring, but has only reported two accidents. As the report states, “The lack of accident reports at the facility while it flares regularly indicates that Venture Global is not reporting its operational problems.”

“Yesterday morning when I went duck hunting they had a big flare going, and same as the day before,” said Allaire who’s lived on his property that’s not bordering Venture Global’s Calcasieu Pass for 25 years, “We could hear the alarms going off this morning that something was going on. I hear alarms two or three times a week…If you look at the historical levels of air quality, the averages have jumped substantially on our air quality issues. More LNG will make more air quality issues.

The areas where Dardar and Allaire live and shrimp are at the epicenter of the liquid natural gas export terminal buildout. Cameron LNG and Calcasieu Pass comprise over a quarter of the United States’ export capacity, with Cameron LNG having the fourth largest export capacity of all facilities in the country. According to the Federal Energy Regulatory Committee, there are plans to build or expand another 13 export terminals in Louisiana. Considering the explosion at Freeport LNG this past June and the impacts these terminals are already having on the local community, this report raises concerns from area residents, fishers and shrimpers that the proposed construction of additional gas export terminals will turn the coast of Cameron Parish into an industrial wasteland.

“To concentrate so many gas export terminals in one area shows a great disdain for the people of Louisiana,” said James Hiatt, the Southwest Louisiana Coordinator with the Louisiana Bucket Brigade who emceed the press conference, “Louisiana has always been a sportsman’s paradise. We were talking about duck hunting. You could live off the land here in Cameron Parish, but now they’re turning this area into an industrial wasteland…This report names many different agencies. If they fulfill all of this and turn this land into an industrial wasteland then that will be the end of industrial and recreational fishing. All of these agencies should cease to continue issuing any permits. We cannot afford any more Gas Export Terminals.”

According to the facilities’ own documents, both facilities are either underreporting accidents at their facilities or failing to report them at all. Considering the explosion at Freeport LNG this past June and plans to build or expand another 13 export terminals in Louisiana, the report raises concerns from area residents, fishers and shrimpers that the proposed construction of additional gas export terminals will turn the coast of Cameron Parish into an industrial wasteland.

There are currently three operating liquid natural gas export terminals in Cameron and Calcasieu parishes: Sabine Pass, Calcasieu Pass and Cameron LNG. Local residents are pushing back against these terminals and calling for investments in renewable energy, such as wind and solar power, in an attempt to save their communities from the dangerous gasses these terminals release and the worsening effects of climate change they will cause.