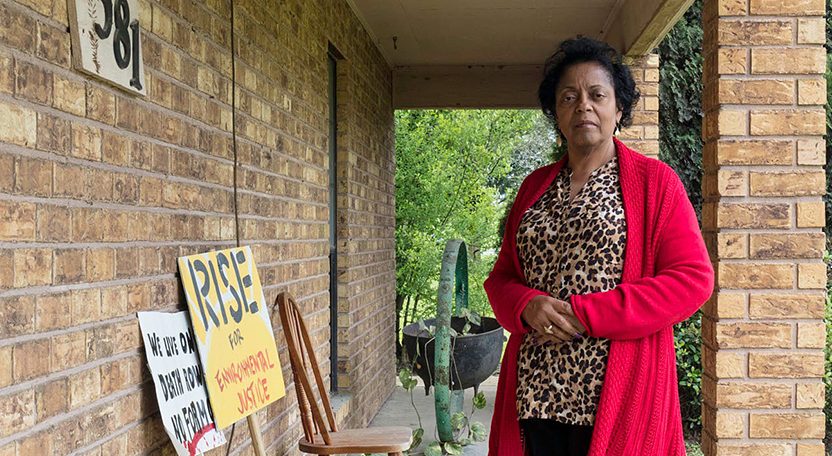 Given how busy the community group RISE St. James has become in recent months, it may surprise some observers that founder Sharon Lavigne is a relative newcomer to community organizing.

“I just started doing something I didn’t know anything about,” Lavigne tells us after a recent strategy meeting with RISE members, LABB and other allied groups. “And all of a sudden, I’ve won an award for it.”

Lavigne marks Oct. 20, 2018 as the founding of the group, dedicated to fighting petrochemical industries that have come to dominate parts of her beloved St. James Parish. Now, her tireless work on behalf of the community – organizing town hall meetings, rallying supporters on marches to the State Capitol, demanding accountability from corporate and government officials and more – has won her an award from the Fractracker Alliance.

The national nonprofit group created its annual Community Sentinel Award for Environmental Stewardship five years ago “to celebrate individuals whose noble actions exemplify the transformative power of caring, committed, and engaged people,” the group writes on its award homepage.

Lavigne is one of four people awarded across the country this year. Each awardee receives a $1,000 prize in recognition of their efforts.

Fractracker announced the 2019 Sentinel Award winners in late September. But even now, Lavigne expresses her surprise. She describes reading the application letter written on her behalf.

“They wrote some wonderful things about me,” she says. “I did all of this? I didn’t realize I did all these things, but everything written in the letter was true.”

Lavigne says she’s overjoyed by the award, but won’t be able to attend the award ceremony near Pittsburgh on Oct. 22 because she’ll busy with RISE’s latest march to Baton Rouge, which kicks off Oct. 16 and runs for two weeks.

And, as welcome as the honor is, it’s a bittersweet accomplishment. The day after we interviewed, Lavigne was set to attend yet another funeral for a St. James neighbor who died of cancer.

Lavigne’s family has owned land in St. James for four generations, and she tells us the fast encroachment of industrial development on her heritage keeps her motivated.

Right now, she says, it’s Formosa Plastics and that company’s plan to build an ethane cracker facility in the heart of the parish’s 5th District that keeps her up at nights. “I think about it all the time,” she tells us. “I know all the things we’re doing; we’re going to stop it.”

She focuses tightly on faith and positivity in her struggles. “Have faith in what you’re doing and believe it’s going to happen,” she tells supporters. “Believe it.”

But Lavigne is realistic about adversities, too. “You will run into obstacles,” she says. “I get that all the time. People telling me I’m wasting my time. But I don’t feel like that. You have to stay positive.”

That positivity can lead to great things. It was just last month that the Chinese chemical maker Wanhua withdrew its plans for a huge new plant in St. James Parish, under withering opposition from RISE St. James, LABB and other groups and concerned residents.

You can learn more about RISE St. James and connect at the group’s Facebook page.